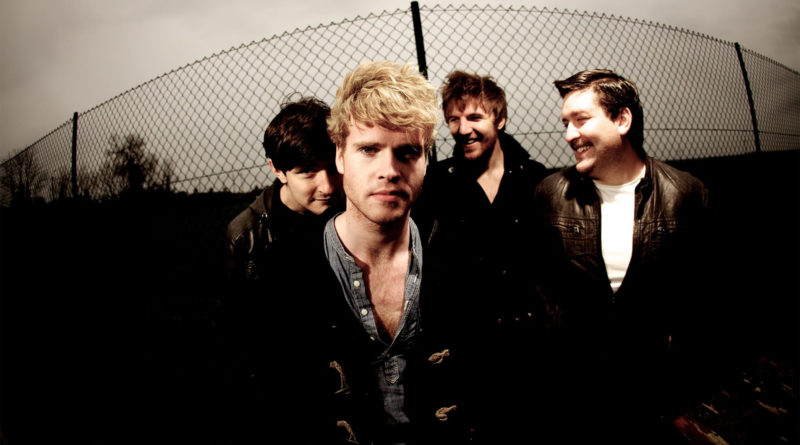 Friday 6th of June, is quite a hot stuffy day. I’ve been runing from train to train to finally arrived (late) in Montereau Confluences festival. Fortunately, I’m told that the interview with Kodaline is still possible. Thanks god ! Reward of a long and harduous race. I meet Mark (guitarist) and Steve (singer) backstage, and we sit in their tiny retro caravan settled just behind Scene 2 where Kodaline will perform in the evening (cf. live-report).

First time you’ve met ?
Mark : We were in school (laughing)
Steve : Don’t go emotional ! (laughing too)
Mark : Do you want to tell this, or what?
Steve : Go ahead !
Mark : We were kids in the same kind of schools from a very young age, so we had already met really long ago. The first time we hang up was probably skateboard. Or football ? I can’t remember it’s been so long, but yeah it was beautiful.
Steve : It was a beautiful day (Mark laughs). We have known each other since we were kids, we grew up in the same area [Swords, Dublin]  we kind of skateboarded together. One day Mark got a guitar and knew I played the guitar, and he was « ok, show me some stuff». Then we kind of start playing music together all the time.

First rehearsal together ?
Mark : It was in my next-door neighbour’s at this time.
Steve : He was an amazing drummer
Mark : Our first drummer was my next-door neighbor and now he still lives there. We played in his sitting-room. We used to be there and play for 10 hours a day the same songs.
Steve : We didn’t have any microphone so we just played …
Mark : … rock music !
Steve : We just solo-ed all the time. There were a couple of noise complains in a row, but it was a long time ago. But yeah, it was cool. Then we met Vinny our drummer to skateboard as well … and then just played together for years. And then we met Jay our bass player two years ago.

[I told them I don’t know Thin Lizzy, and they start singing “The Boys are Back in Town”]

Steve : There are like such a famous famous band, a very prior Irish rock band, I mean there is a statue of the lead-singer in Grafton Street in Dublin ! They were pretty big around. I always thought they were big in France, haven’t they ?
Mark : They were kind of big anywhere.
Steve :  And« Dancing in the moonlight » ?

[Both of them start singing “Dancing in the moonlight” introduction, snapping fingers]

Rocknfool : Sounds good, I’ve got to listen to that !

What’s the first album that you’ve bought ?
Mark : First album I bought was … (thinking) “Five’s Greatest Hits”.
Steve : Did they had a greatest hits? …They don’t have a greatest hits !
Mark : Five a boys band, you know.
[facing my sceptical look]
Steve : You don’t have to listen to this.
Mark : No they’re awful.
RockNfool : Mine was Robbie Williams so … I don’t judge.
Steve : I think I bought “Millenium” as well. I was like 7 when I bought my first CD,  an Elvis Presley CD 1957-1960. I don’t know where I bought this, but it was good one.

First artist that you think about when I say Ireland ?
Steve : Van Morrison or U2.

First song you wrote together ?
Steve : When we were around 15, a song called “Hold On”, again it was full of solos.
Mark : Pure rock (laughs). We don’t play it anymore
Steve : And then we wrote a song called “Wild”.
Mark : It was a classic !
Steve : What else do we have ? (he begins to sing an old song of them)
Mark : “Addicted” ! We were more like “add it some slack”…
Steve : That’s because we didn’t really know how to play music, we were more solos and guitare stuffs as opposed to actually writing songs you know.  We’ve written some terrible stuffs.
Mark : Oh yes … there was shite.
Steve : We used to have this little recorder thing, I gave one to Mark as wel. We just had so many sounds on, that we used to record. There’s one in my house but you still got one ain’t you ?
Mark : I’ve got one that I bought after that and it still has like 200 songs ..
Steve : I’ve been meaning to work on it and release back the CD, see if it could work.
Mark : It’s terrible, I think I want it gone.
Steve : Really ? We never know…

First festival as festivalgoer ?
Mark : Electric picnic !
Steve : In Ireland as well. We did lots in the UK…We did like 30 last year.

[At this moment, I understood “turtle last year” and ask them about this fest, they laughed and explained that Steve said “thirty”]

Mark : It’s the Irish accent ! [then, he says an incomprehensible sentence with lots of “t” sounds, with Irish accent, and of course, they have a laugh.]

First festival as a band ?
Steve : We played one in Ireland, that was before Independance day, because Independance day …
Steve : …was our last of that tour. We’ve played in smaller festivals, I can’t remember names, but it was pretty diversify.
Mark : Like 200 people generally.
Steve : It was tiny tiny, everybody was drunk and nobody listened to us.

First thing that crosses your mind when you jump on stage ?
Steve : “I hope I don’t fall over”.
Mark : I don’t know,I usually just kind of walk until I have my guitar.
Steve : Lately, it depends on what song we are opening, and since I play tambourine I keep hoping that that tambourine is there, cause otherwise I wouldn’t know what to do with my hands.

First musical disappointment ?
Steve: Well, when we were young we were in a band …
Mark : … we lost a competition.
Steve : We lost a talent competition [You’re a star season 5, Kodaline was called 21 Demands at this time]. We came second, we were really confident, too confident. We had rehearsed so much and we thought we were so much better than we were. I think that everybody thinks that when they first start playing an instrument we just think we’re amazing and everything. Everybody wanted a solo and yes we thought we were gonna win and everybody was saying that we were. It was a tiny little competition, but that was pretty heartbreaking. We got a lot of people coming to see us like labels and stuffs, and you know they just walked away. The only thing that kind of keeps you positive to all is just writing songs , playing music, because you don’t have anything else…

First really mean criticism that you’ve received ?
Mark : We haven’t received that butt mining critics really.
Steve : We got a review in Q Magazine, I kinda liked it, because it was so bad that it didn’t make sense. It was like, this guy clearly didn’t even had listened to the album because he didn’t mentionned any of the tracks. It was a complete dismissing. But it’s everyone personal’s opinion. The main thing is, someone gives us a bad review and particularly in the UK where we can play a festival we can rip against a crowd. Last year was amazing though, they’ve been singing back all the words of the music to us. Most importantly is that people actually know us and that they don’t mind listening everything about us that reaches their ears.

So you don’t read anything about you ?
Steve : Not really no.
Mark : Well unless someone tells it’s good !

To finish this interview, I ask them if they could take each other in pictures to illustrate the interview. Hopefully Mark says that they can do that, they do quite often. Then we talk about French festivals, that are “always cool” according to Steve. Happily for us ! Because we really want to watch them again on stage.

Big thank to Sophie ! And to Emilie and Juliette, my Irish accent helpers ! Don’t hesitate to tell me if there’s  some English mistake, I will correct it with great pleasure.