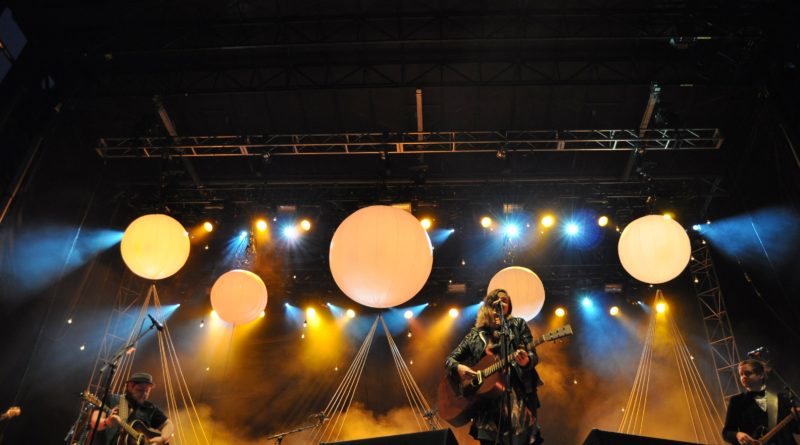 If you want to know everything about me, you have to realize that my ringtone is one of Of Monsters and Men’s song, and one of the best concerts I did in my life was OMAM’s gig in Montreal. So when I was offered an interview with this amazing band I obviously said yes. We’ve met in the back of a great parisian palace, close to the Champs-Elysées. Ragnar (voice + guitar) and Brynjar (guitar) greet me, even though I’m all stressed out. I’m the last interview of their promo day. Luckily the guys are fun and put me quickly at ease. Let’s start shall we?

I have to start by asking you how do you live this incredible fame of yours?
Ragnar: It’s not as glamorous as people might think!
Brynjar: I think we never thought of us as famous so we’ve never done anything… We haven’t change I think!
Ragnar: Life is maybe more confortable for us, we are not students anymore…
Brynjar: Yeah we don’t get paid in beers anymore.
Ragnar: Our first gigs it was like: everyone has free beers! So that’s better now… but same old!
Brynjar: Everyday life is just waking up at 8…
Ragnar: 8? (smiles)

You must be quite excited with this new album coming out…
Ragnar: YES! It’s out on Friday I think! Monday here and Friday in Germany.
Brynjar: Excited and scared!

With all the success you had with My Head is an Animal, did you felt any pressure while you’ve finished your worldwide tour and had to start writing again?
Ragnar: After we finished touring we took a little break, started writing… Of course more pressure because people are expecting something.
Brynjar: But we kind of never talked about it, or let it affected us… We were at home, and tried to write music together, all of us. We met everyday for 8 hours or something.
Ragnar: It was just bringing the band together, playing for hours, going inside your own head. We had each other to keep sane, so we are fine! (laughs). Brynjar had his hair turned grey under pressure you know, it’s the only thing that changed!

I thought that Beneath the Skin was the logical sequel of your first album. Do you agree with that?
Ragnar: We stayed true to ourselves, but we didn’t repeat ourselves either. We’ve tried a lot of new things. The songs are better on that album… but you might see it like you said, maybe it makes sense.

You’ve carried on singing as a duet with Nanna, what do you think it brings to your sound? Or is this more a vocal signature now?
Ragnar: It think it’s a good tool to have, to switch between singers because you can change the songs a lot, switching from the female to male voice. It adds a sort of dynamic, it’s fun, she says a couple of lines, I say a couple of lines, we sing together. Like the electric guitare that can switch sounds, put different effects on it, it’s how we can play with the vocals.
Brynjar: It gives another texture, another feeling…
Ragnar: Yes, and it can bring a song back to life, it’s just finding what fits the song.

You have this incredible world, and you’ve already talked a lot about how your Icelandic culture affected you. There’s even a kind of tribal sound to your music. Is there something else that inspires you as much as Iceland?
Ragnar: Just music… all around the world. Iceland music is just music that comes from everywhere, really.
Brynjar: It’s just a melting pot of musics.
Ragnar: American, European… that is the music we grew up listening to. That’s what influenced us a lot. For this album it took two years before it, lot of places, lot of influences as well…

Because you’ve got your own sound, we know it’s you when we hear you.
Brynjar: Oh, that’s good to hear! (smiles)

Like this special bond with nature, elements, which are very present in your lyrics. Do you think that your lyrics find echoes in a more and more environment conscious audience?
Ragnar: Woh! I don’t know, I think it’s something we’ve got growing up in Iceland, around a lot of nature, and when you write lyrics you are searching for words and ideas, and these are the words which pop up because you grew up around it. But it’s a good question ! I don’t know… One song in the album kind of touches this subject…so… maybe ?

And are you yourself politically engaged to environment?
Ragnar: I don’t know… I woudn’t say… It’s hard to put it in English (laughs), I’ve never answered this question ever in my life in English! In Iceland nature is very important to us, and when nature gets pushed away, when man replaces it with buildings and stuff like that… I usually tend to disagree with that.
Brynjar: It’s a sensitive subject in Iceland, because for example they sometimes build huge constructions, just throwing and sinking part of lands. It’s not a good thing and they try to justify in saying it gives work to people. Sometimes it’s good, sometimes it’s bad. Most of the times it’s really bad.
Ragnar : People just think about today, because if you ruin something, it’s ruined forever.

Could you honestly live somewhere else in the world than Iceland? I don’t know if you’ve realized but you’re quite like Icelandic ambassadors!
Ragnar : [a wasp just flew next to his head] There’re no insects in Iceland, that’s what we like (laughs). I think I would like to try to live in bigger cities.
Brynjar: Either I would be living somewhere like Europe or in the Faroe Islands.
Ragnar : I could try to live in a big city for a maybe year but we’re too used to be in small community… But Iceland tourist office does not pay us ! (laughs)

All your imageries are very meticulous and distinctive, very beautiful. Is this something important for you? And do you participate in the graphic creation of your albums?
Ragnar: We did all the work for the first album, and we know how we want it to be. Almost all of last tour and last album mechandising was done by us. But this time we’ve worked with someone else because last time we were doing it on the road, just before playing, so it was getting kind of hard…
Brynjar: Everything ended up getting done last minute, under pressure.
Ragnar: We have worked with an artist this time, we’ve gone back and forward with him because it’s very important to us.
Brynjar: Then when you buy the CD, you have a beautiful thing in your hands…
Ragnar: It supposes to be precious, it’s what your music comes in, it’s like a cover of a book, you want to put efforts in it.

You’ve just release a lyrics video for I Of the Storm, with Atli Freyr Demantur, his female make-up and his transgender look were laughed at in the comments. You probably know that two years ago in France, half of the country was protesting for months against the same-sex couple marriage. Was is your way to take side and support the GLBT movement?
Ragnar: Yeah in Iceland we’re very… (speaks Icelandic with Brynjar)
Brynjar: I think that in Iceland it’s a bit more free spirit, for example the gay pride parade is the biggest event in Iceland every year. More people come to see the parade than the Independance day…
Ragnar: We are all the same and we are all different. And it’s cool to be different, it’s ok, you don’t have to be effrayed about somebody who’s not exactly like you. If everyone was thinking that way I think that the world would be a much better place.
Brynjay: Also you can’t force people to be someone they’re not, people would just have to be who they are. As long as everyone is happy why not let them be happy?
Ragnar: And this album is about being open and being yourself a lot. It’s what we did with the lyrics videos for every song sung by a different person every time. It’s just about getting all sort of people because it’s an important thing for this album.

Some artists never talk about themselves in their songs. So do you think it’s too personnal, maybe too superficial to talk about oneself in lyrics; for example hard break-up, sorrow…?
Ragnar: You have to talk about personnal experiences in the lyrics. In everything. If you’re writing a screenplay, a book… It’s important because that’s the only thing you really know, what you’ve gone through. You take your situation, you kind of exaggerate it, but you have to talk about yourself. I feel like even if someone is writing a story and he creates a caracter, what he goes through is always something the writer went through himself.

And is this the case for your last album?
Ragnar: Yes, all of us I think. Sometimes it’s not exactly what you think it is, but the starting point is at least something you’ve gone through.

You’ve covered many times Skeleton by the Yeah Yeah Yeahs. So I was wondering if you’ve got a guilty pleasure song that you would very much like to cover next?
Ragnar: Ouh ! We’ve actualy been thinking a lot about the covers but we haven’t found any we’d like to cover. And I don’t really believe in guilty pleasures because if it’s good it’s good, no matter who wrote it! I would very much like to cover Whitney Houston, she’s got a lot of good songs. It’s probably hard to cover, but I would love to try. It’s difficult because you want to do a better job but when you try to cover a singer like Whitney Houston you just probably fall on your head. You don’t want to copy because you would just gonna be ended up doing worse than the original, you want to do different.
Brynjar: And I want to do Beyoncé! I think Ragnar would be really good to sing that!
Ragnar: I’ve sung it million times!

Maybe it will be your next cover on tour!
Ragnar: I can only hope! (laughs)

Two questions left! Could you tell us what’s the worse question you had to answer during an interview?
Ragnar: I don’t know! (silence)
Brynjar: This question? (both of them laugh)
Ragnar: But it’s a good question, it’s always good when you have to think! (silence) I’m apparently very tolerant because I can’t find any. What Brynjar was saying, things like: what do you look for in a woman? Or something like that which has nothing to do with music. So we try to stay away from these types of papers. I can’t think of any worse question, I’ll email it to you!
[Brynjar speaks Icelandic to Ragnar]
Ragnar: Oh yes, it usually happens in Iceland, the press is obsessed with this. They always ask us…: Do you make any money? Are you rich? It’s important for them to know. We always expect this question when we go in interviews in Iceland. I think that it’s because it’s a small community, lot of people know each other, it’s just curiosity, like you’re picking into neighbors window.

Is there a question that I forgot to ask you, that you wanted me to ask?
Ragnar: Where our name came from!
Brynjar: What we like in women… (laughs)
Ragnar: And what our music and inspirations are… How to say our names… Well you know, we look forward to the album coming out, and we hope that the people like it!

Interview by Emma Shindo. In Paris few days before Beneath the Skin came out.