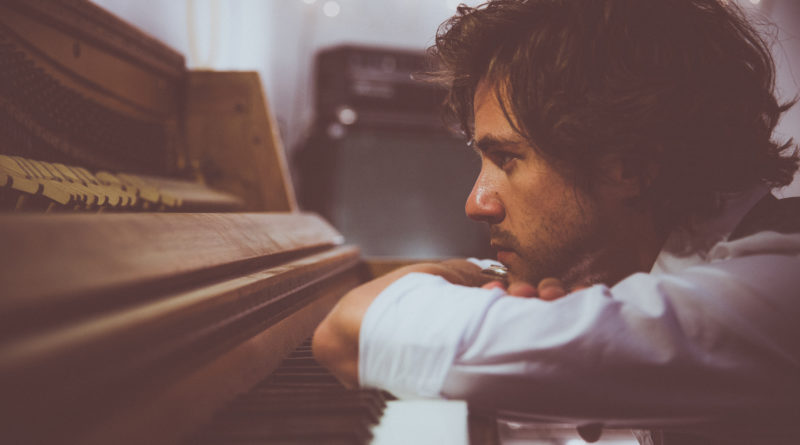 We were supposed to meet in November, few days after his concert in the Pop-Up du Label in Paris. But the events of November 13th made that impossible. We finally met Jack Savoretti in January, at the end of a cold afternoon in a cosy Saint-Germain-des-Près hotel, where the English songwriter is giving a bunch of interviews for the last couple of days. He arrives quite relaxed, very professional. So after two questions, when he realises that my recording wasn’t working properly, I apologise profusely. He laughs and tells me: “don’t worry, I’ve done much worse”. We start again. The atmosphere is calm, almost appeased.

I’ve read that you wrote the whole album (Written In Scars) the same day it has been recorded. Didn’t you think it was a dangerous approach?

Jack Savoretti: Actually every song was recorded the same day the songs were written, because we had decided to start working with the rhythm. In the morning we put a rhythm down and by the afternoon, we had a song! And that just happens naturally and it became a process we used for the whole album.

The more sincere you are, the more people can relate to your music. Do you think that writing a good album means necessarily doing a sort of public self therapy?

There is one thing you can’t fake, and that’s being genuine. You can fake everything else, but you can’t fake authenticity. I think the more genuine you are, that’s why people react to it, because they can trust it. They can trust art, to a certain extent. Some people at the opposite like to be challenged by art. But the music we like to make, is genuine and sincere: I like that aspect about it. So there is a bit of therapy to it but I think it’s more about expression and getting it out.

Your album is mainly autobiographical. What would you say to people saying that writing about oneself can be quite indecent in a way?

It depends what you say! I don’t think any of the topics are that indecent. I’m never really direct, I’ll never name somebody… but it’s why I write. I never think “today I’m gonna write a song about love, or today I’m gonna write a song about war”. I never think that. You start the music, and then something just comes out. I never really know what is happening until half way through the song. Sometimes even years later! Sometimes I think I know why I wrote a song and years later I hear it, and I’m like “aaah, that’s why I meant!”. That’s your subconscious becoming your consciousness. That’s the journey of most arts.

How was it to work with Matt Benbrook (Dido, Paolo Nutini)  and Sam Dixon (Adele, Sia, KT Tunstall…), your two producers, on such a personal project? Like sharing the work…?

I loved it! It wasn’t really sharing, it was totally together. It was fun, jaming… Music is supposed to be played with other musicians and it’s something in the past that I couldn’t do, because I didn’t wanted to: nobody was available, I couldn’t afford it, or nobody knew who I was. It’s a bit like building a football team: you want it to be stronger, so once you start getting good, you want to bring in new talents, more people that can make it fun to play… Going to the studio alone was not what I wanted to do on this album. I did it in the past but this time I wanted help to make a stronger project, I wanted to learn a bit more about how can I take this somewhere else. I didn’t want to make the same album again and again and again… so bringing in more musicians made that possible.

But isn’t it too difficult to work with 2 people, I mean it’s like having 3 different ideas at the same time no?

We’ve never all worked together, it’s always one on one. But I do work with my guitarist Pedro and Seb my drummer, and we work as a triptych! It’s kind of nice because one of us is always the filter if one likes something and the other one is going that way. Sometimes everybody disagrees and it’s chaos. It took me a long time to love working with people. Everybody I work with now I adore so it makes it easier, you have to respect people you work with to be fun.

I felt, while listening to your new album, that your music sounded more down to earth, more sincere. Do you think you’re finally at peace with yourself, and therefore with your music?

I don’t know if I’m “finally” but I definitely started to be more at peace with myself. I think that’s definitely made a big influence on my music, and on how I make music because I’m very at peace with everybody I work with. One thing I’m very proud of, is the team.

So if you could erase permanently something from your past, what would it be?

I woudn’t change anything! I know it sounds cliché. There’re things that hurt more than others but I wouldn’t change them because I’m so happy of where we are today from a personal level and from a professional level. I don’t know if would have got either of those things without having gone through that past. I really mean it.

In your interviews you always end up talking about your parents. Do you think that our parents musicals tastes define a career?

I don’t think they always do because sometimes people rebel to their parents’ tastes, but for me it was very important. My musical education was done by my parents. They definitely gave the base of the kind of music I knew. So when I found it later on it was conforting and nice.

You’re kind of a big star now in the United Kingdom, in Italy… you’ve done great venues in your career. Isn’t it too weird when you play in other countries to be back in small venue like the Pop-Up du Label where you’ve played few week ago in Paris?

I wouldn’t say a “big star” (laughs). It’s working but slowly and surely. But it’s not weird because we’ve done it for so long… I’ve played everywhere: I’ve played in front of 20.000 people and I’ve played in front of 20 people. You just have to adjust, it’s different. Sometimes it’s a lot scarier the smaller venues than the big venues because you can’t hide! You can’t hide behind cool lights and great sound system… you’ve got to deliver! I can say that genuinely from doing both. Again, it’s a bit like football: it’s a lot harder to be good on the streets than it is in a beautiful stadium with a great grass and nice shoes… So the smaller venues are actually much harder, they are always a challenge! You get to change the set up, you get to go back with revisiting things. But smaller venues are more difficult in every way, you’ve got to good, to be good in a small venue. It’s tough but it’s what I like about it: small venues remind you that you’ve got to be good and stay good.

I saw that you’ve sang a duet with Lissie on Written In Scars, on your song “Wasted”. We really really like Lissie on RockNfool!

Her new album is amazing… She’s an amazing girl. I love Fleetwood Mac and Lissie is really that sort of sound. I love that voice, I proposed her an idea and she said yes!

So how did you guys met?

You wanna hear something bizarre? We still haven’t met! We became pen palls! We start writing to each other a bit before this happened because I’ve been a fan and “When I’m Alone” is one of the coolest song I’ve ever heard. I was obsessed with that song. So we go on touch about doing something together and she was coming to England, but we never met in England… She was in Nashville working on her album and she said: “I can’t come now because I’m in the studio” and I said: “if you’re in the studio, can I send you something?”. I sent it to her, and two days later she sent it back, “oh I’ve done this” with the vocals and we put it on, and just like “boum”. We write to each other a lot but we still haven’t met face to face! So it’s this bizarre 21th century admiration… I was supposed to go the her show in London three weeks ago but my little daughter got quite ill…

What would be your dream collaboration?

Last but not least. Do you think that maybe someday songwriters will conquer the world?

I don’t think there’s anything to be conquered (laughs). We’re doing pretty good! Songwriters are back. You know Adele is a singer-songwriter and she’s rulling the world! Lady Gaga too. It’s funny that people often think that songwriter are guys and girls with a guitar but Lady Gaga writes her own songs and she sings them. I think it’s what is happening! They definitely take the music business because people like stuffs that are genuine. Elvis didn’t write many songs but still he was the King!