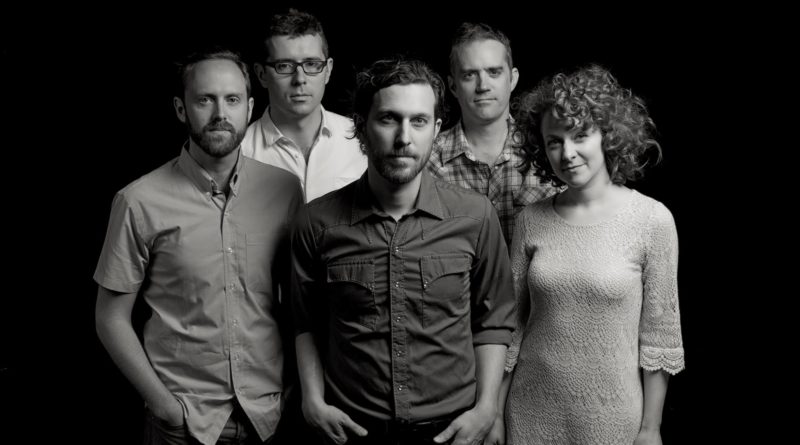 There’s a couple of bands that I’d never thought I would be lucky enough to meet one day. I’ve been listening to Great Lake Swimmers for 10 years. TEN YEARS (yes, that’s a lot as far as I’m concerned). I was still in highschool, and finally discovering good music, music that I’m still listening to every day now. I’ve always loved Great Lake Swimmers’ folk music, ethereal and so touching, so I had to ask for an interview, taking advantage of their second gig in Paris after their 6th album release, which I was luckily granted. I met Tony Dekker, frontman and leader of Great Lake Swimmers, on a sunny day, for a rooftop-boat-spilled-coffee true or false interview. I think I’ve never met someone so patient, driven and understanding. A delightful 20 minutes chat.

Rocknfool: You’ve sometimes played as a solo artist, but you’ve said that you were really happy about the band joint effort on that album [the work done by the drummer for instance, since Great Lake Swimmers’ sound was more stripped down before A Forest of Arms -, their lastest album]. True or false: the more, the merrier?
Tony: Not always true. A few years ago I released a solo album called Prayer of the Woods and I felt that those songs didn’t need anything extra. I felt that just me playing the guitar and a few accents here and there was enough for it. On this tour for example, we’re revisiting some of our back catalogue, our older songs and we’ve decided to do an acoustic formation so we’re playing with the three pieces – three of us, banjo/guitar player, bass player and myself. So not always the merrier, because I think sometimes it’s good to take things back, and quiet things down.

True or false: folk songwriters are by definition depressive human being?
Oh, I don’t know about that! (laughs) I don’t think it has to be. I don’t think you have to be always brooding and unhappy in order to write good songs. Sad songs always come a little bit easier to me, there’re the ones that I can deliver the best, for whatever reason. Sometimes it comes from a very deep place,  sometimes you can feel a real connection on stage, and you can dig pretty deep into that kind of material. With songs that are happier it’s maybe more light-hearted, meant to entertain you know? The songs that we do they’re also created to make you think, so hopefully it leaves you with feeling something and also giving you something to think about.

You’ve said you’ve resisted the impulse to release a rock record. True of false: it’s always tempting for acoustic bands to turn to electric music at one point in their career?
That’s true. To me it’s… too easy almost to do that. At least from my perspective, we tried to do something on an acoustic level and, on a quiet level, on a smaller level and I think there’s more of a challenge in there, than turning everything up or turning the amps up to 11 and blasting away with sound… I love music like that, and there’s a certain energy to it. It can be just as spiritually uplifting as any sort of quieter folk music or whatever you want to call it. But for me, I found that the challenge is in making something quiet, it takes more effort and that’s harder. It would just be too tempting to do a rock record.

The banjo, the violin, the double bass are the secret ingredients to a very grounded and sincere sound. But it’s not really made for the stage. True or false?
It’s true in some ways. Actually it takes a little bit more preparation to get the right sound with using acoustic instruments, putting them through a sound system and amplifiers. Basically we can be a string band too. It’s just that for a touring band, clubs aren’t really set up for just “playing into the air” acoustically. I love it when we have the chance to do that… But it can translate, it can work as well, it’s certainly not as nice as playing into a very small room, with a small amount of people, because I think these instruments are definitely designed to do that. We try to make it work too with plugging them in, and we can kind of go both ways: without amplification and with as well.

True or false: songwriters have no holidays and no proper life, since they have to constantly write new music and lyrics?
(smiles) I was just talking about that the other day, on this tour actually: we were talking about people with regular jobs. They get up in the morning and go to work, and when they come home their job is done and they can sit and relax… With musicians and especially songwriters, you are always working and thinking about the next thing. You don’t go home from work and put it away. For me anyway, I don’t feel like I have that kind of relationship with my work, my brain is always working, or I’m always thinking and working in some way. There always seems to have more to do, whether it’s writing songs or trying to figure out what to do about social media (laughs), what to do with your record label, with your band, touring… But I’m happy with what I’m doing, and I don’t take it for granted. It’s an honor to do it, for sure! I feel very lucky to have a kind of creative life, and to share it with people. And being able to travel, you have to look at the pros and cons of it: traveling is one thing that’s nice but you pay for it by being away from home, from loved-ones, from family… It’s a constant balancing act, and it’s a constant ups and downs, you have to appreciate the ride I guess…

True or false: it’s easier to write about melancholy and sadness?
As creative people we are drawn to extremes. So in a way it’s easier to write about extreme emotions and the feeling of sadness, or heartbreak, or sorrow, it can be a very deep emotion, it’s not a surface emotion. I don’t know if it’s “easier” but maybe more compelling, there’s a more clear path. It’s not necessarily easy but more heart consuming.

Nature is an endless topic to write about, especially when you’re Canadian. True or false?
I guess in some ways (smiles). As Canadians we have maybe a little bit more of a special connection to our landscapes and our environment, we have to be conscious of it. There’s a history of the necessity of being in tune with nature, especially with weather patterns, the cycle of the seasons… in order to survive in the past I think. It places forward into the culture. We have such big vast streched open land, it’s something that impresses itself on us, whether we wanted to be or not! Some of us are just more in tune to that than others, living in a modern society. There’s an endless inspiration in nature anyway, for me personally, because we can learn a lot about ourselves, in our societies, in our cultures, how we relate to people, how we relate to the Earth, how we relate to everyday things. There’s a lot of good lessons in the natural world, to learn from. It can be kind of a spiritual place.

So, true or false: Canadians are conventionally comitted or involved into wildlife and nature protection?
There’s a struggle going on, not just in Canada, but elsewhere in the world. In particular in North America, between standing up for some of our last natural spaces and the real strong desire by corporations to exploit these last places. There’s a lot of pressure, a lot of money behind that. True wilderness and real ecosystems that haven’t been touched by mankind at all, that don’t have a fence around them, those are the kind of places we have to protect, and there’s people that have been living on the lands in Canada for many thousands of years, who haven’t given it up at all, they’re now standing up, feeling the pressure from, for example, large oil companies to come in, for pipelines or use the land in a way it shouldn’t be, because the balance is tipped in the favour of the large corporations. And the power has traditionally not been in the hands of the people who have the right to be there. It’s a very tenuous and difficult time right now that we’re living in, because we are at risk of definitively loosing it all, we’re living through a turning point. I wouldn’t say that Canada is any better than any other country, really, people try to fight the good fight in a lot of different places. I wish we could do more, I wish we would do more.

True or false: Canadian bands are slowly conquering the world?
(laughs) Well, I don’t know about that! It’s certainly nice that it’s being recognised, but it’s maybe just coming from its own in a creative way, in the last 10-20 years, just Canada being recognised as a creative place with all genders of music, not just indie-folk, indie music or whatever. All kinds of genders, particulary in Toronto: there’s such a diversity there, in styles of music, hip-hop for example. And that’s pretty removed from my world, but I recognise that it’s part of what makes the city diverse, and allows that kind of creativity to happen. Conquering the world I don’t know just yet!

Any Toronto band that you could tell us about?
I really like a band called The Burning Hell, they’ve been touring a lot in Europe, I think they’re on tour right now actually! They’re probably one of my favourites. Ariel and Mathias from the band have released an album of duets called Don’t believe the hyperreal, it’s probably my favourite record right now, it’s amazing.