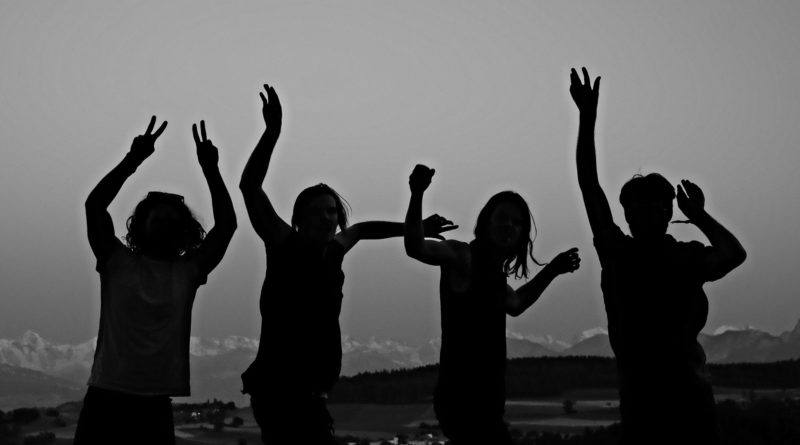 I won’t lie, we’ve been looking to talk with Half Moon Run again for a long time. We were supposed to meet them twice since the release of their second album last year. But we-they couldn’t make it. You already know how much we love the music they’re making, and so have we since the very beginning… Sun Leads Me On has been out for a few months now, and I figured they had already answered loads of questions about this record. So as simple as that, I decided to do a check-up interview with them: how is Half Moon Run doing?

The group had just arrived in Quebec city when I met in the lobby of the hotel the two brave members of the band who had comitted to answer interviews that day: Dylan (drums) and Conner (keys+guitar). Conner and I sat at a gloomy table of the hotel restaurant for a quick chat.

Rocknfool: So you’re back in Canada after a very long tour, it must be nice to be back home… you look very tired actually…
Conner: I’m ok! (smiling) I was sleeping in the van on our way, so maybe I look tired, but I feel fine, and I’m happy to be home yeah!

Did you intend to conquer the world by touring everywhere you can?
I wouldn’t have thought it in that way, I wanna keep playing music for a living. It’s fun to go to new places especially when you’re just starting off, it’s important to tour a lot, so more people hear you, so that hopefully they will like you, so you will be able to continue playing music for a living you know, that’s the idea, that’s a promotional thing. There’s an exciting part in it: to go all over the world, but at this point I would say it’s more practical. There are still places that I enjoy going to, but the thing with touring is that it prevents you, us, to write more music, because when you’re travelling that is not what you’re doing… I think if I had it my way it would make me happier if we were able to tour less and write more.

You’ve been taking some kind of holidays lately? Is this something you intend to do more in the future, and does it allow you to write new material at the same time?
We’ve been to Norway, we had one show there, but we decided to spend a few extra days in Norway because it’s beautiful there. We’ve been making more of an effort to try to enjoy more of our time when we have a day-off here and there, we’re trying to do something fun so it’s not just one place to another, one show after another… it helps you feel inspired for more music when you have some good times.

What’s the next destination for writing?
I do like writing in Montreal, that’s where I live so… we have some plans for what’s gonna happen next but we actually decided no to tell anybody what they are! Sometimes when you have an idea, you tell somebody, and then you kind of lose interest in the idea?! You have to keep things secret sometimes… (laughing).

Now you’re a full 4 people band, how do you make new music as a group?
Everytime is different! There’s the aspect where we practice the songs, and that’s easy, we play and talk about it. Then songwriting is always different: just one little idea that somebody is playing, then other people start joining in… sometimes it takes one day, sometimes it takes six months… I wish that I knew the formula, it would save us a lot of time! But… there’s no formula…

It’s probably a boring question, but do you feel more or less pressure on your shoulders now that you’ve confirmed your status as a big band?
There are different kinds of pressure… When we were making the second record, we really worked on deciding to not think about it… what we’re trying to do is just making music and be creative, live good lives and be happy people you know, and have other interests as well. And so, when you start thinking about we’re an established band or these people are gonna be expecting something from us if it’s business people, or fans, or whatever… I find it much simpler, if you just don’t worry about it. Do I feel much pressure now or then, if you ask me that question, what I will immediately do is say “I don”t know! I don’t care, it doesn’t matter!” and not because it’s a boring question,  just because it gets to a point when it’s important not to worry about it.

Will you continue to explore more sounds and atmospheres like you’ve done in your second album… because it was so different from the first one! It was quite surprising…
We definitively will I’m sure. We haven’t written our third record yet, but there will be all kinds of new things, not in one direction. More electronic I don’t know… I really can’t say. We always like playing different instruments… there are always a few things that will never go away like singing harmonies together you know, we will always do that. We are just gonna do what we want, what we feel like… (laughing)

There are always these expectations on the third album, since the second one is more or less like the first one…
I will give the same answer that the one about the pressure. If I’m happy with it, that’s all I really care about. If I worry about that, it’s too much to worry about: I wouldn’t want to make that decision because maybe the fans won’t like it, or maybe my manager won’t like it, maybe the record label won’t like it… there are a million things that you can worry about. And at a certain point you just have to worry about none of it. When we made the first record, we had no fans, we were a completely new band, and so all we were worrying about was what we were doing, and how we wanted to sound, we released it, and it turned out that people liked it so that was great. Now I think it would be good to just approach it the same way.

You have this huge dedicated community of fans even though you’re not really social medias guys…
There’s a constant struggle! I don’t know how to do it! I don’t like communicating that way, I still don’t really understand it you know… There are so many people on these plateforms who are watching what you’re saying. The social medias stuff… I don’t know (smiling) !

I need to ask you that: who had the idea of the oven mitts in your merchandising?
Just as social medias, one thing that I don’t understand is merch (laughing). No comment!.. I still think it’s not a bad idea! I mean… you have oven mitts at home right? There’s an answer somewhere but I don’t have it (smiling).

Super large question, but what’s next?
Well… We’re gonna make more music, I guess it’s what it is. Once our tour and obligations are done, it’s gonna be about making new music again. But in terms of how it’s gonna happen… just to do things how we want to do them. With that comes a great deal of freedom and it’s exciting to consider all the possibilities, the different ways that we can make music and release it… so I’m looking forward to a very big next step, but in terms of what exactly it’s gonna be… it would be no fun if I told you now! All I can say is that we’re looking foward to making new music and sooner than later!

Is there a question I did not ask you you wanted me to ask you?
I did interviews, and I’ve been doing them recently, and I’m glad we didn’t talk about this because I feel like there’s this thing that keeps going on in interviews that I do: people tend to ask you’ve met on Craigslist, now you have a lot of success and what’s it like? After all these years you’ve been to so many places in the world, what is it like, it must be so great? They say all these kinds of things, and I’m just confused about these questions. Rather than a question I wish you had ask, I’m glad you didn’t ask that one! There’s something that frustrates me about the fact that you make music and you wanna talk about music or life, and some people always want to talk about success! Success is a really personal thing: it depends on how happy you feel, how much you feel you’ve been affected by what you’re trying to do… those things I’m happy to talk about, but I don’t necessarily believe in success… (smiling).