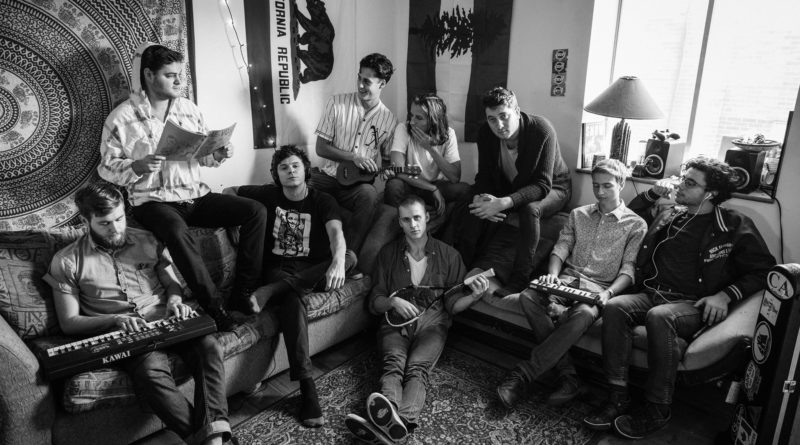 INTERVIEW – We’ve been told a few months ago that we absolutely needed to hear and see that new young amazing Canadian band called Busty and the Bass. A 9 people band from Montreal. Lucky us, they were coming to Paris for the first time on the 21st of June, our national Music Day in France. We met Julian Trivers (drums) and Eric Haynes (keys) at the end of their great (great great) show at Les Invalides, two absolute sweethearts.

Rocknfool: First musical memory as a band?
Julian: On the first week of McGill (University), I met the guitar player and he said: come over we’re gonna make some music, my living room is open to jam… I moved my drum set there and all of a sudden we started joining up, playing in parties and hanging out more and more. After a couple of weeks we started jaming pretty much every week. It turned out to be a more serious thing by the end of the year: we started writing tunes… Basically, the guitar player gave us a place to play music, get drunk and meet each other.
Eric: That’s pretty much what we do! (laughing)

And as children, any musical memory as well?
Eric: I really wanted to play drums when I was a kid. My parents wouldn’t let me, because it’s too loud… So it’s a good thing or else Julian has some competition!
Julian: Yeah yeah! No kidding! (smiling) I got lucky because my parents are musicians and they allowed me to be a drummer when I was 3 or 4 years old. I got my drum set when I was 4… I just played along with records, made a lot of noise, trying to figure it out you know?!

First gig you went to as an audience?
Julian: Massive Attack? I think I’ve been to Massive Attack when I was pretty young… Great show! They’re one of my favourites! We just played in Bristol in the UK and that’s where they’re from. Pretty cool to see at a young age!
Eric: When I was little, my dad took me to a concert, Peter and the Wolf, you know the classical piece? And I thought it was so cool: being on stage and playing at the same time, it doesn’t really matter what style of music you’re playing… I started doing classical piano and then I moved on to jazz, and now I’m doing like whatever genre Busty is, I guess a sort of mishmash of all sorts of things. From a really young age I was fascinated by being able to get on stage, and play music with a bunch of people… I thought it was the coolest thing and I feel so lucky to be able to do it now!

First album you bought?
Julian: Do you know the band Korn? I freaked out on the album Follow The Leader! Oh my god, I played the record to my entire family, made them sit down and listen to it… My world changed when I heard that record, I was like… it’s amazing…
Eric: It’s tough to remember, I think it was System Of A Down…
Julian: YES!
Eric: … Toxicity! I was like in grade 7, and really trying to figure out how everything worked. Not that I have, but… yet… System Of A Down definitively helps! (laughing)

First song you wrote?
Julian: I think the first song we wrote was “Tryna Find Myself”…
Eric: Yeah, that was our first! We sort of have a unique writing process, because it’s really collaborative, we work together on a song. And “Tryna Find Myself” that was Milo (Johnson, bass) and Scott (Bevins, trumpet) who started it but someone started bringing new ideas, we all sort of contributed to it and tweaked the arrangements. That was the first song that we ever made a music video for, and that one kind of started it I guess…
Julian: I was in L.A at the time, and these guys were working on it in New York, like creating the foundations of the song. I was flying to New York, we had a gig that night, and they sent me a little audio file, like garage band kind of version of “Tryna Find Myself”, and I had to learn it with the garage band version! It was a stupid program drums, little keyboards that sounded silly… We rehearsed that afternoon, played it that night, and basically my part’s never changed! I learnt the drum part that day and it’s pretty much been the same from that moment to the record… And it’s still one of our bigger song, we end the shows with it!

First job?
Julian: I was very lucky to be in a jazz band in highschool, I had a gig every other week. With this quartet we played in cocktail parties, restaurants… People would hire us, and I was able to do that throughout my highschool career, that was pretty much my first job.
Eric: I did a lot of jazz stuff like that in highschool too… Then my first summer after I went to Montreal for university, I came back to Calgary and had a job at Steinway piano, trying to sell pianos (laughing). That was an interesting job, it was fun because you get to demonstrate the pianos, how people find out what kind of piano they want… It was really cool, but also stressful: I’m glad I can do music now instead of retail!
Julian: I got lucky as well after my first year of school: I got a job in L.A, working at a recording studio, basically sitting back and getting coffee for artists and stuff, observing what goes on… my boss had a big audience coming through and he was a really professional studio guy, so I got a little help from him to understand the studio business…
Eric: Who were some of the artists coming through?
Julian: They had Daft Punk, Randy Jackson…

So your first time in the studio?
Eric: We were actually pretty lucky because at the school where we all went to, where we all met, there is also a recording program. So the recording studios are always looking for bands that they can record, so it’s free but not always very good. But that was our first recording experience together at our school.
Julian: They wanted to record us, it’s part of their curriculum to record bands so they would be asking us to record: you wanted to do something? And we were like ok, we’re working on covers but we weren’t working on writing on our own music at that time. So we’ve gone and played some Otis Redding tracks or some jazz standards and learnt how to do it.
Eric: It was good, because I had no idea what a good studio process was, not that we have figured it out now, but it’s definitively been a learning process.
Julian: Recording is such different from playing live, especially for a drummer, the way you mic things, the way you tune the drums, so it was also a learning experience for me, because what I do here would sound terrible in the studio. I have to make sure that it’s controlled.
Eric: It’s tough for us too, because we started as a live band, it really took us a little while to learn how to switch to a mentality of recording…

First show?
Eric: The first show Julian told you about was like a party in Montreal where we all got drunk and jammed, it was so packed and sweaty but we had so much fun! People really wanted us to do it again!

First thing you do when you jump on stage?
Julian: Mentally preparing myself because you wanna visualise what it’s gonna be when you get up there, at least try to imagine what it’s gonna be like, or else you gonna get suprised or get nervous. It’s a frightening thing if you go up there and you’re not prepared, you see a big crowd staring at you… You have to mentally get yourself ready for that! Then take a couple of big breaths, go up there you know, settle yourself!
Eric: For me I’m just trying to make sure all of my keyboards are turned on, working, and I’m trying to make sure that there’s nothing technical that goes wrong. Because the more you can focus on music, the better. If you can try to forget about all that other stuff that can go wrong…

First thing you do when you go off the stage?
Julian: Drink a beer! (laughing) Cheers!… Hug everyone. It’s usually a brotherhood you know, we’re really happy that we did it, usually there’s a lot of energy afterwards, we’re very excited…

First time in France?
Eric: This is my first time in France! This is our first ever tour out of North America. It’s so incredible to be here. It was my first full day ever in Paris, we arrived last night, and it’s been so cool! I really love it here.
Julian: It’s gorgeous here. We went by the river and we tried to get from one bridge to another bridge: right on the edge of the river, a big boat came by, with big waves and totally got our legs wet… we got pretty unconfortable today! [they came a fews days after the big Seine flood which happened in May]

It’s quite dangerous out there!
Julian: Yeah but it’s beautiful!
Eric: There was a big fish just on the side of the river, that was crazy!

I didn’t know there were real fishes in the Seine!
Eric: It wasn’t a friendly fish!
Julian: Other than that, it’s the most beautiful city in the world! We’re very fortunate to be there!

Thanks to Eric & Julian for their time, and Kenza. 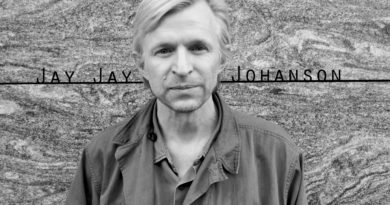 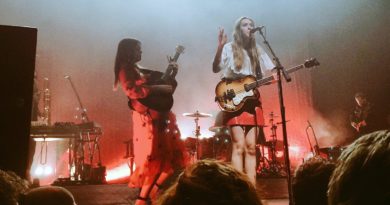